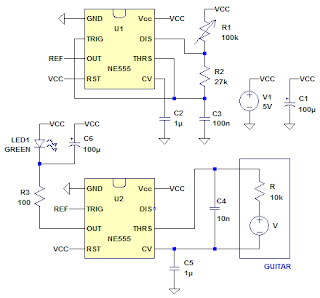 My first entry for the 555 contest is an electric guitar tuner using one 556 IC, a few resistors and capacitors, and an LED as output.

The tuner only tunes to the A2 note (110Hz) which is the fifth string on the standard EADGBE tuning, so it's a very basic tuner. But for the number of components used I think it's pretty good.

The tuner works by outputting the beats between a reference 110Hz signal and the signal from the guitar. Basically, when two signals of different frequencies are added together, they interfere such that the resulting signal oscillates between high and low amplitudes. The frequency of this oscillation is the same as the difference between the two source frequencies. For example, if a 110Hz signal and a 112Hz signal are mixed together, the output will have a beat at 2Hz.

The second 555 is where the magic happens: the reference signal is combined with the guitar signal.

The second 555 drives the output LED directly, and there is a capacitor across it to filter out any potential high-frequency beats that cannot be perceived by the eye.

To tune a guiar, you play the fifth string, and look for the beats on the LED. Adjust the tuning knob so that the beat happens at a slower and slower frequency, until you can no longer notice it - the LED will be at a constant brightness. The fifth string is now tuned. The other strings can be tuned based on the A note.

And that's how this circuit works! Here's a recap in motion pictures form:

Of course, there are still a lot of things that can be improved. First, the reference signal has to be trimmed and is unstable. It can vary a lot with supply voltage and temperature differences, directly affecting the accuracy of tuning. The output is also a little hard to read. But still, using only two 555's and a handful of passive components, it's probably as simple as it gets!

Thanks for reading!
Posted by Jim Chen at 5:36 PM

Email ThisBlogThis!Share to TwitterShare to FacebookShare to Pinterest
Labels: 555 contest